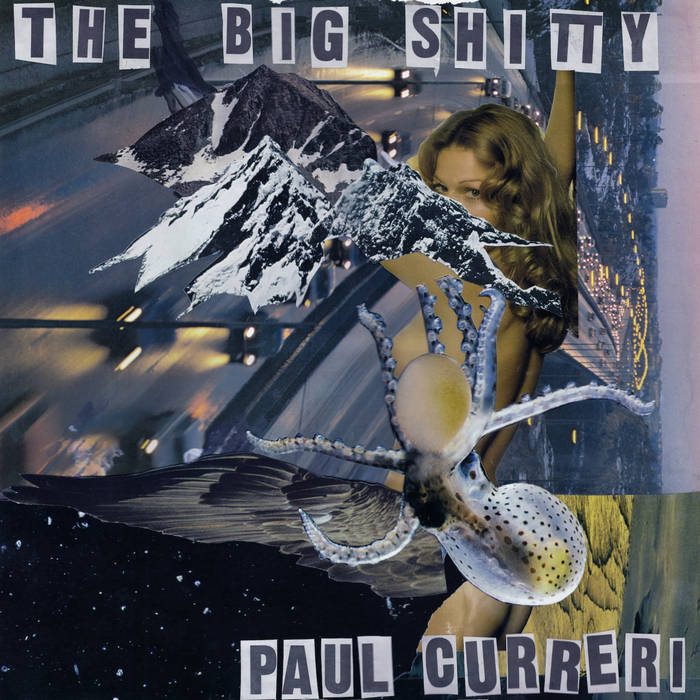 This October, Tin Angel Records will proudly release The Big Shitty, the eighth album by Virginian songwriter / guitarist / producer, Paul Curreri. Primarily recorded over four day's time in a wintery Berlin, Curreri's much-celebrated guitar prowess is supported by the excellent English rhythm section he's toured with for the past few years -- Joe Carvell (bass) & Euan Rodger (drums). With the exception of one track on which his wife, the lovely Devon Sproule, pops up on a very distant clarinet (a new interest), like his last two albums, Curreri handles all additional instrumentation himself.

Leaning deeply forward into arrangements which are spacious, electrified, and sharp, the resulting performances by the core group seem graced by a sort've musical fearlessness. And Curreri, heady & hunting, at times sounds viciously close to unhinged. And perhaps he should.

The Big Shitty seems a place populated by a people nervously questioning their long-trusted paths, whose gangs are in various states of dissolution. Their comfy defaults, the bumper stickers, even the tattoos look different. The truth is not just out there, it's cracking its knuckles on your front porch... again.

"The last time I was in this ditch / I must not have thought I was done with it. / Here beside the broken mattress: / Two bottles of red, two books of matches."

Explosive and evocative (and often surprisingly humorous), Curreri's lyricism indicates his familiarity with the place. But on the surface, this batch of songs seems less immediately autobiographical, more character-driven, more fantastic. On "Hacket," swampy guitars high-five an ironically sunshiny piano, and a young man at a critical impasse is introduced:

"I should tell you: Hacket born John Justice. John, just as his father was; / Justice: from him mother's side. / John became Hacket after quitting every sports team. / It was a funny time. / Still, Hacket was happy till a bug hatched inside him, / Its chemical guano set to shorting his penchants. / Add that to the booze and life's general break dance -- / Gets tough to harmonize."

And there are the tribal people who inhabit "The South Tip," who meet weekly to dance and cut meat beneath the stars and the eyes of history ("The past stretched out like a tall smoker lying down."). Atop a single trancey guitar riff, babies are born, drums circle, and young lovers try to figure it out:

Still, one can't help but be aware of the occasional parallels between these scenarios and Curreri's personal life. It seems he and Sproule are finally leaving "The Velvet Rut," the nickname for Charlottesville, VA, their hometown at the edge of the Blue Ridge mountains. (Curreri's fifth album, which received 5 stars in MOJO, wore the nickname as its title.) This fall, the couple is relocating to Berlin, Germany. The album's final track, "Who Got Gang?," seems to frame the decision around the slow decline of a very special friend:"Jack was slender as a perfect function, / With a gate so Spanish and over the weather." But the well eventually runs dry:

"Jack's passing made me leave the country. / It was my wife's idea. I was drunk and ugly. / Just a killer carving, baby, just a ruthless tempo, baby. / And in time the blame I choked unfolded. / Jack, you were better than the folks could've known they wanted. / Just a constant vogue, baby, just all around, baby."

While it wouldn't be a misinterpretation to call The Big Shitty dark, there is a well-lit elegance to Curreri's articulation of its subject matter -- lyrically, but also via his melodic and production sense. One of our staff noted that she thought she'd still understand the album "even if Paul weren't singing in English." High praise, and well-deserved.