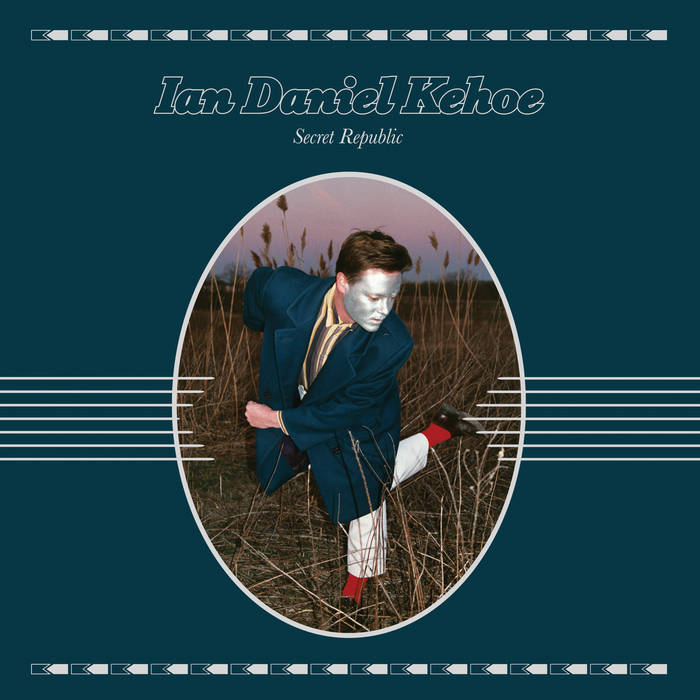 It seems now that Ian Daniel Kehoe has been hiding in plain sight. A classic songwriter pulling from a seemingly endless supply of hooks, dancing through his debut video in silver face paint and an assortment of wide shouldered sports jackets, Kehoe appears somewhat like an apparition, an emissary from a better world. Secret Republic,Kehoe’s debut under his own name, is an entirely self assured first record, ten confident, immaculate pop songs, drenched in analog synth and punchily articulate in their pursuit of love, beauty and rhythm. Recorded and performed entirely by Kehoe himself, the record is a introduction to this world, one where melody reigns supreme, every love is a true love, and the singer searches endlessly for “prizes through the mazes of the jungles, prizes at the tips of the poles.”


While Secret Republic may be a debut, Kehoe has appeared on the musical scene in various guises. For the past few years, he has toured extensively as a drummer for Andy Shauf (Anti Records), The Weather Station (Paradise of Bachelors), and Julia Jacklin (Polyvinyl). Before that, he was bassist and songwriter in Attack in Black (Dine Alone Records), while releasing several records as Marine Dreams (You’ve Changed). But Secret Republic is something entirely new; the debut of Kehoe as a preturnaturally confident front man and producer, with a tight grasp on every musical weapon at his disposal. Secret Republic is a record made in a home studio, a record where Kehoe played and recorded every note, and yet it doesn’t feel inward looking or introspective. Many of the songs are constructed as crowd pleasers, songs to be played from bleachers, soundtracks to first dances and first kisses, songs that could sit alongside ‘Girls Just Wanna Have Fun’ on the radio circa 1983. That isn’t to say though that the record feels universal or ordinary. While being eminently approachable, it would be impossible to see it as anything but the product of a very singular mind, one particularly attuned to beauty, and to the taut magic of a perfect riff.


Those who know Kehoe, know him to be almost mythologically prolific. It is rumoured that this is only one of four records Kehoe wrote in the last year, all while touring heavily. But while this output may summon an image of the single minded producer, holed up in a home studio, the music itself insists on such vivid ideals as beauty, love, and the spirit. ‘Through the thunder I swear I heard a whisper from the heart of the storm’ he sings on the title track, elaborating on a ‘secret republic, talking downwards’ from the clouds. ‘Fate Gets Closer’ and the dead serious ‘One Picture’ are wildly romantic, speaking to a notion of endless love and destiny. ‘Evil People’ is almost funny, with its ‘Thriller’ esque haunted house sounds and ascending chorus. Live, Kehoe sings in full voice, arms held upwards, disarming the crowd with a curious mixture of seriousness, humour, and showmanship. Kehoe is alive to the joyful and almost comedic possibilities inherent to the role of the pop singer. Witnessing Kehoe stop a set to read an original poem, or lead a brief discussion of an idea of infinity, a curious alchemy is created in the room, as the audience hovers between laughter, curiousity, and reverence. To Kehoe perhaps, these states need not be so opposed.


Kehoe has always been a disciple of pop music, in the most traditional sense of the word. A lover of Nick Lowe and Harry Nilsson, Queen and Michael Jackson, Kehoe adheres to the idea that music should be moved to, danced to, sung along to. To Kehoe, this is both the most serious thing in the world, and also not serious at all. And this is borne out on Secret Republic, a record to soundtrack a love either deep or glancing, a record for dancing or for thinking, a record both heavy and feather light.