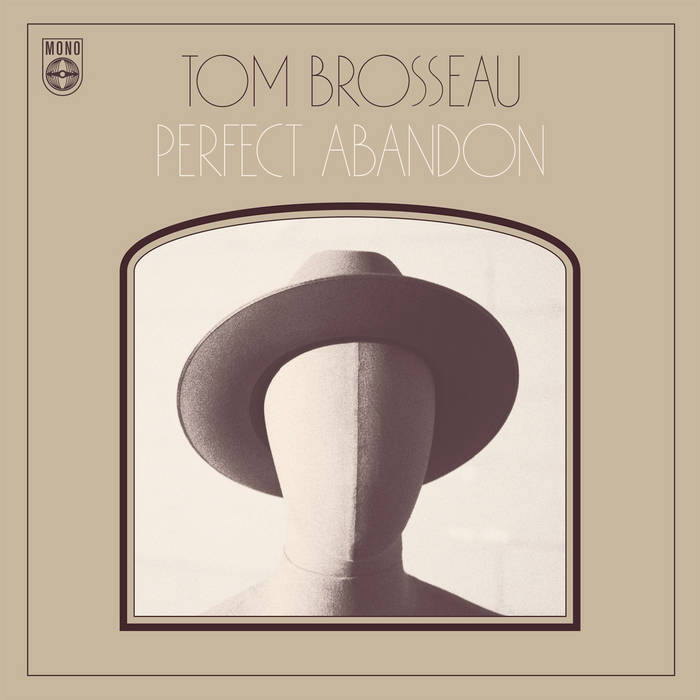 Perfect Abandon is the new album by Tom Brosseau. It was produced, engineered and recorded in Bristol, England by John Parish (PJ Harvey, Sparklehorse, Peggy Sue) and Ali Chant, features a 2-piece drum kit, double bass and Stratocaster guitar. Themes of the songwriting include man struggles to understand divinity, betrayal of a kinsman, discovery, individualism, love.

Tom Brosseau on the album title:

"The title comes from a page in the long-forgotten Delmore Brothers autobiography, Truth Is Stranger Than Publicity. In it Alton Delmore writes about J.L. 'Joe' Frank, one of the first big-time country music promoters and managers in Nashville, and specifically how he wore his hat 'with a perfect abandon.' In the Delmore book there are no photos of Joe and his hat, so you must use your imagination. Me? I envision the crown of the hat to be pushed way back on the head, so that the peak of the hat is up beyond the hairline, exposing the forehead, the facial features, like James Dean in Giant. While the hat may appear to be getting away, it never fails. A person in this fashion could be perceived to be without restraint. Life is not a care, life is not a worry."

Tom Brosseau on his background and the recording of a Perfect Abandon:

"I grew up with music in the church, in the school, music at home. I learned a lot of hymnal and folk songs, both traditional and contemporary, and since I was influenced by what my grandparents listened to, in a sense I studied the singers and songwriters of the great American songbook.

"My friend Scotty Wilson had magically come across a cassette tape of comedian Richard Pryor. We'd all of us neighborhood kids huddle around the boom box and listen. What I remember most, aside from the copious amounts of swear words, was the audience. They were in hysterics, some sounded like they were dying, some sounded like they were being born! Side A to side B the audience was an ever-present level of water, coming up, coming down, coming up, coming down. Likewise with other recordings, the spontaneity of the sit-down portion of the '68 Comeback Special. Here Presley and his band performed seated, which is unusual for rock and roll, their musical instruments hot-sounding from the tube amps, some strings slightly out of tune; D.J. Fontana, Presley's drummer since 1954, beating on the top of an empty guitar case. The knocks of the musician's hard dress shoes on the floor, the musician's elbows on the amplified instruments, the twisting of the black leather suit, and certain idle chat and flash remembrances in between songs. All of this stays.
"I have always liked the live sound. There's an unbound energy present, and when recording in this mode there's a feeling it is all happening without a net. In that sense, the clouds of staleness that can sometimes accumulate in the studio never take shape in the live setting, never congregate, and so never shade, never stifle. Instead, the atmosphere is…exciting.

"This was the mentality producer John Parish had going into the recording of a Perfect Abandon. Concerning the recording equipment, just a single microphone. Nothing more. We were all of us players together on the stage for two afternoons at the Cube theatre in Bristol. David Butler on drums, Joe Carvell on double bass, me, Ben Reynolds on electric guitar, and Parish sometimes on organ. The challenge was to figure out how close each man needed to be in relation to the microphone for a suitable sound, and this had to happen with each song individually. If the drums were coming across too loudly, the drummer would have to move his kit a plank or two of the stage back from the mic. If the bass needed to come up, the bass moved a plank towards the mic. The end product, for better or worse, would truly to be its own thing. There'd be no overdubbing, no raising or lowering the levels of any one instrument. So, the album you now hear is simply the choosing of which take of which songs."

All songs by Tom Brosseau

Produced and recorded by John Parrish at The Cube and Tombox Studios in Bristol, England