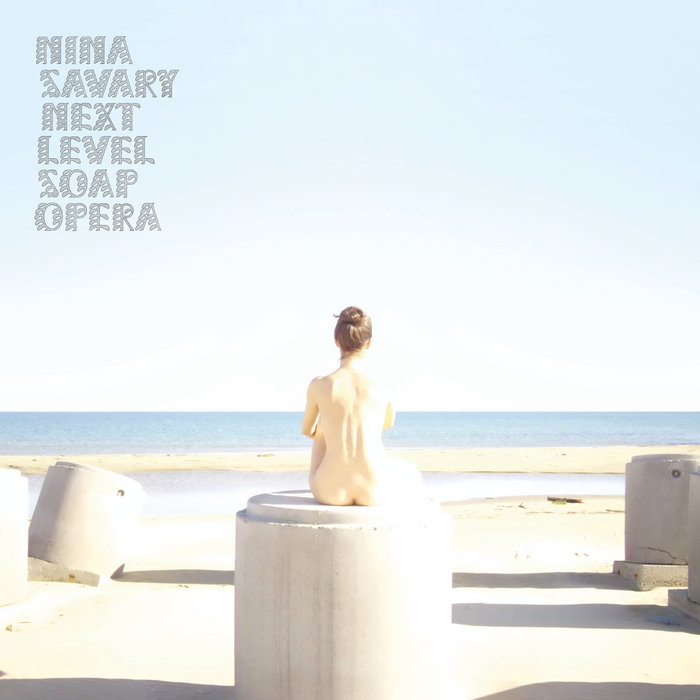 
The best advice one could give a happy wanderer to pinpoint Nina Savary's universe on a map would be to proceed by elimination. Look for where she is not rather than where she actually is ; for her place of residency is in the exact opposite direction of the current state of emergency. And omitting to indulge in a tired eulogy for idleness, sloth or rest, we can be sure that the French singer, dancer and actress diligently steers clear from the pangs of chaos.

"To go there or stay where I am rejected / To stay there and there or go where I project myself" she sings on 'Par Millions', one of the tracks from her debut album Next Level Soap Opera. This doppelgänger both uprooted and yearning for great escape, sums up Nina. One foot in, one foot out.

In, because of her upbringing ; in many ways, Nina Savary can be seen as a born entertainer, always in her element. She made her start at la Scala in Milan age 4, learned the ropes behind the scenes on tour with her parents' theater company, the untamed, anarchic Grand Magic Circus.

Out, because she purposefully produces music in closed circles, with road companions like Marker Starling, Laetitia Sadier or Julien Gasc, as well as her partner producer Emmanuel Mario (Astrobal) with whom she formed the band Institut (with Arnaud Dumatin) and the project Vivre ! in 2020.

Next Level Soap Opera is the result of many years of friendship, encounters and collaborations. It is a record that sensitively features aspects of herself and close relationships. It also speaks of companionship and camaraderie, as well as addressing themes drawing on a certain idea of utopia. Recreating a society on a human scale where everyone writes, composes, plays.

Next Level Soap Opera sung both in English and French is an extension of Nina's past life, but also her way to emancipation. It allows her to shine as she steps out through the curtains shooting all her artistic arrows right on target. This record will speak to people uprooted within their homeland, to fans of orchestral pop and library music, to Lewis Caroll aficionados and others keen on surreal cinematic atmospheres.

Lost in the Corbières in the South of France, La Bergerie as it is known to dwellers and visitors alike, the sheep farm where Next Level Soap Opera was recorded is a place of residency, work, celebration, leisure and encounters. Many artists come by to record with Emmanuel Mario and they are not the only ones to visit this old family house that ghosts of the past also inhabit. It is an ideal setting to make DIY video clips (the video of 'Second Guessing' was made by director Lucie Bourdeu, Nina’s cousin), where daydreams are crafted carefully.


Listening to Next Level Soap Opera in that very special environment, we understand that Nina Savary doesn’t choose between the verse " Anywhere out of the world" by Baudelaire and a quote "There's no place like home" from The Wizard of Oz. She operates on both levels.

ALL VOCALS BY NINA SAVARY

Recorded by Astrobal at La Bergerie in the south of France.
Mastering by Bo Kondren at Calyx.